Many great people share a birthday on January 3rd including actor Ray Milland, First Lady Grace Coolidge, hockey great Bobby Hull and legendary Beatles producer George Martin. A great American born on this date was none other than the man, the myth, the legend: Robert Lee Hilligoss, who turns 72 today. According to the records, Robert was born at 11:45pm at Jarman Hospital in Tuscola, Il, 15 miles from the family home in Humboldt, Coles County. Robert was delivered by Doctor Gross to parents Letha Cook Hilligoss and Robert Samuel Hilligoss. Robert’s maternal grandparents were Edward  and Ruth Mitchell Cook. His fraternal grandparents were Kenneth and Eva Wright Hilligoss. According to his baby book, Robert’s first journey took place on January 7th, 1941 when the family was transported from the hospital in Tuscola to Kenneth Hilligoss’ farm in the Schrader Funeral Home ambulance and the temperature that day was 12 degrees below zero. 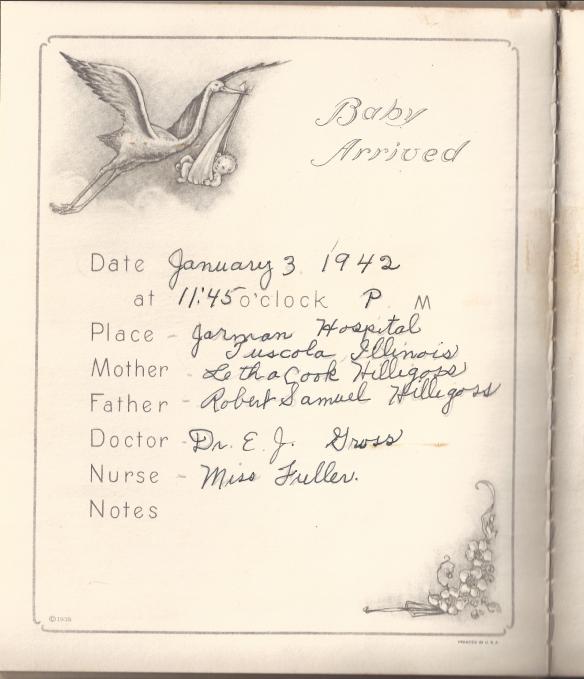 Upon their arrival home, the baby’s first visitors included: Mr. and Mrs. George Wilson, Ms.Mildred Mitchell, Mr. and Mrs. Mildred Barnhardt, Mr. and Mrs. Ed Cook, Mr. and Mrs. Kenneth Hilligoss, Mr. and Mrs. Leslie Hilligoss, Grace Louise Orndoff and Joe Evans. We do not remember days, we remember moments For the purposes of this piece, I asked dad to give me some early childhood memories in his own words so we can hear it straight from the horse’s mouth, or mule’s depending  on who you ask.

1) On the morning he was born, father Robert asked Dr.Gross how much the delivery would cost, to which the doctor replied, “Do you think that boy is worth $25 dollars?” 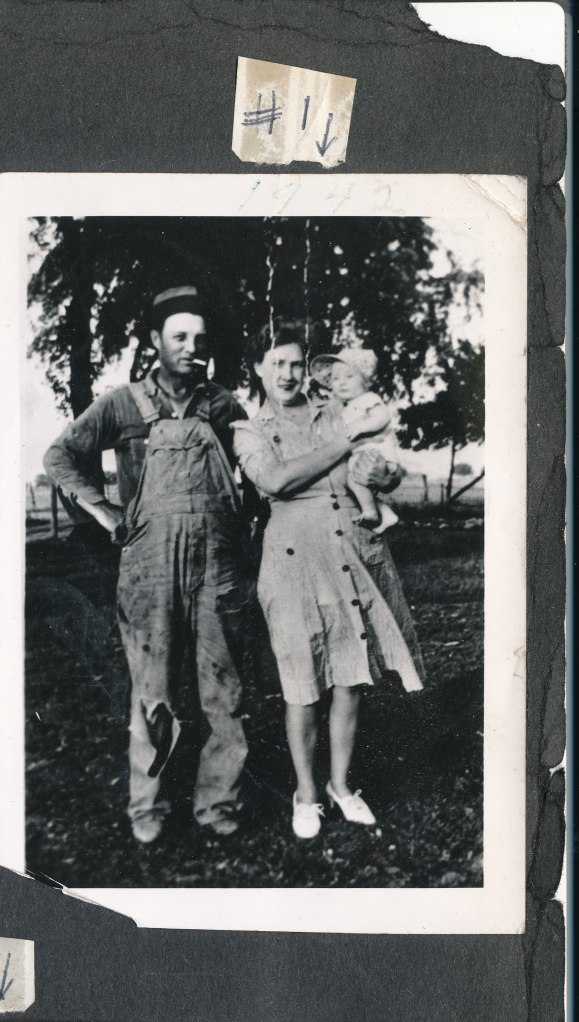 Robert Lee being held by Kenneth and Eva Hilligoss

2) “The day mom and I caught a train at the Humboldt Depot in Oct. or early Nov. 1945, early, early morning.  The milk train, for Chicago.  Sat in the ICRR station all day awaiting for dad to return from the USMC.  He failed to show for some reason.  We returned to Humboldt dad showed up a week or so later right at Thanksgiving time, 1945.  There are photos of that day.” Yes there are and below is one of them. The baby book states, “Came back (sic Robert) to the states September 20, 1946 and his 30 day furlough began October 13, 1946. He was discharged November 27 at Great Lakes Naval Training center.” 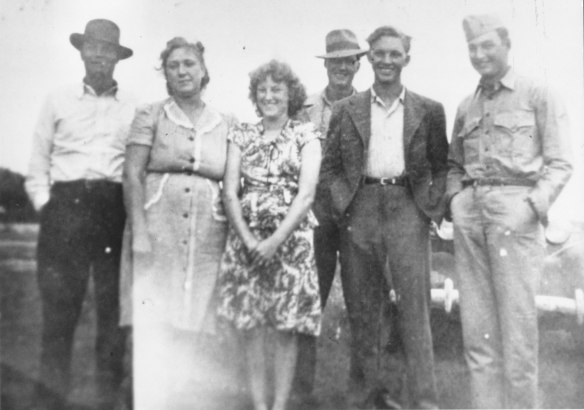 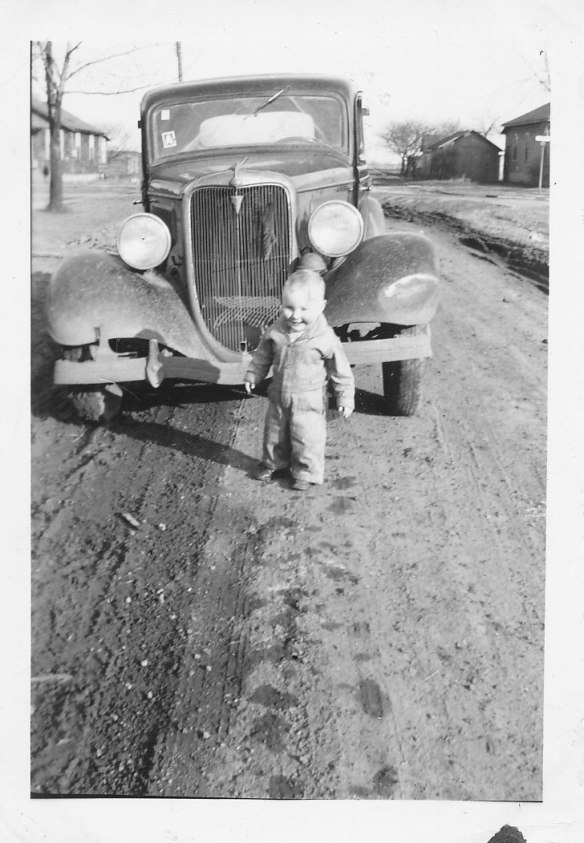 3) “1st grade. Seems as if we had a lot of snow, and being the only 1st grader I was an easy target for older students. I’d come in from the playground wet from being rolled in the snow.  One day Miss Emily took my to the cloakroom had me strip down to my underwear, put me in a smock.  I sat in the first desk, front row of this one room schoolhouse, grades 1-8, in a dress.  The are two points I’d like to make about this simple story.  1.  In a day of frivolous law suits, the teacher would probably face trouble, she would be accused of damaging my self-esteem, she was concerned with saving my life from pneumonia.  She faced charges that bullying was allowed, I think in reality it was a lesson of life that needed to be learned.”

4) “One day I was standing in Granddad Cook’s front yard probably 6 years old, I think I was watching Ed Cook and dad dehorn cows.  Mom pulled up in a hurry and shouted that Ronnie had just swallowed Kerosene. Dad dropped his tools, ran and hurdled the picket fence that sat out front of Ed’s house.  I was astounded, my dad could jump that high.  Dad, for a person who never played organized sport, was a natural athlete.  He could do it all.  In his forties he, Ronnie, and Rick would go to the Arcola football field where he enjoyed kicking field goals.” 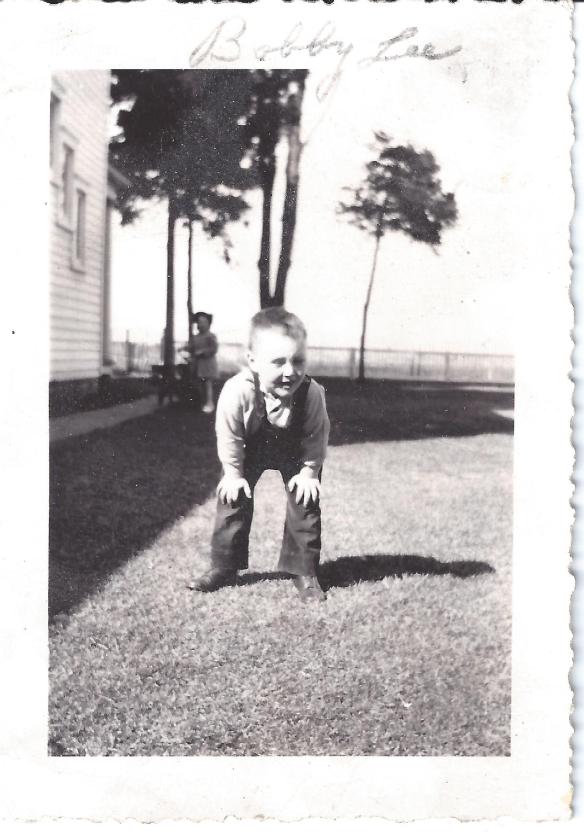 5) ” In the second grade in 1949,  many people in the USA were being struck with polio.  One day one of my classmates was absent.  He may have been absent for several days, but on this given day, I raised my hand and asked, “Miss Emily , Where is Kenny?”  Miss Emily replied, “Kenny died.” That was a jolt in the seat end of your pants!  We got through it without any scars that I am aware of and without anyone holding our hands.”

6) “In 1953, right before harvest time and before school started, my parents decided to visit my mother’s half-brother living in Pueblo, Co.  When we travelled there were no motels to speak of, plus we travelled on a shoestring budget. We’d sleep in the car, and on roadside picnic tables. One day dad wanted to rest a bit, and pulled into a city park in the middle of Kansas, Dorothy wasn’t there.  Ronnie and I jumped out of the car to play and went running for a swing set.  Out of nowhere this man who was waving a pistol came up to us and told us to get out of his park.  Mom stuck out her famous chin, charged into the playground.  The next thing I knew dad had her by the arm and threw her into the car.  Ronnie and I were close behind. Dad drove out of the park in a flash.  He was yelling something about never challenge a crazy man, who is waving a pistol in your face. ”

In his email to me with his thoughts, he closes with this, “Favorite memories are tough to separate from all memories.  Today sitting here at McDonald’s watching snowbound traffic, snow clouds my memory. “Over the river, and through the woods to Grandmother’s house we go.” I can understand as my thoughts are often clouded with my own memories and of those of others who came before and after. We all share the same memories and hand them down from generation to generation. Happy 72nd birthday pop. 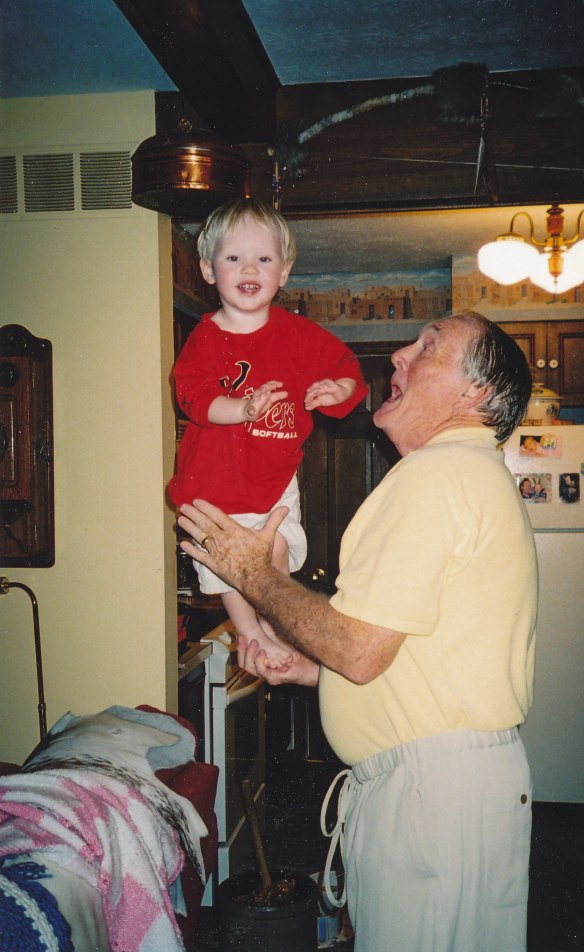 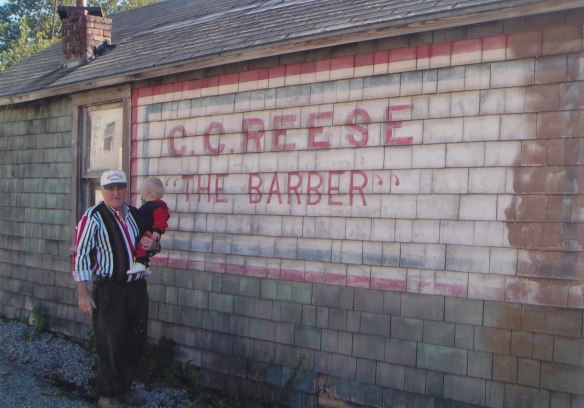 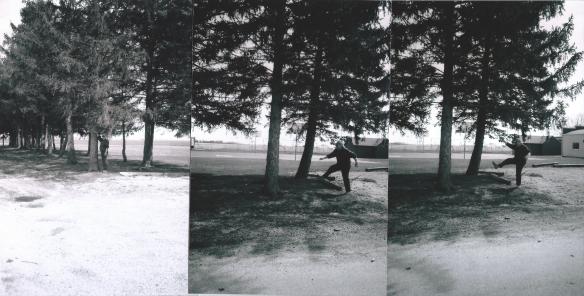 Pine trees in front of Humboldt Elementary school. Dad first points to where the trees stood in height when he was a student and then recreates how he used to jump over them everyday at recess.

Letha’s Boy, by Sharon Hardin Behind blue drapes with cabbage roses Hat watches the paper boy, the grin on his freckled face, when he sees cookies she placed with the Journal payment, in the Mason Jar kept for that purpose on the porch “Letha’s boy’s a cute little fixen, Not like the boys that chant From the bushes— ‘Three old, grey witches, A biddy, a crazy, a stringy old maid, Living in an old grey house.” When the bike rattle fades She steps out on the porch For the paper, then back inside Thinks, “If me and Paul had married, Had a house full of freckled-faced boys, A grandson the age of Letha’s boy, I wouldn’t be a sour old maid, Hiding with ‘Crazy Glade’ Here in Mamma’s house.” 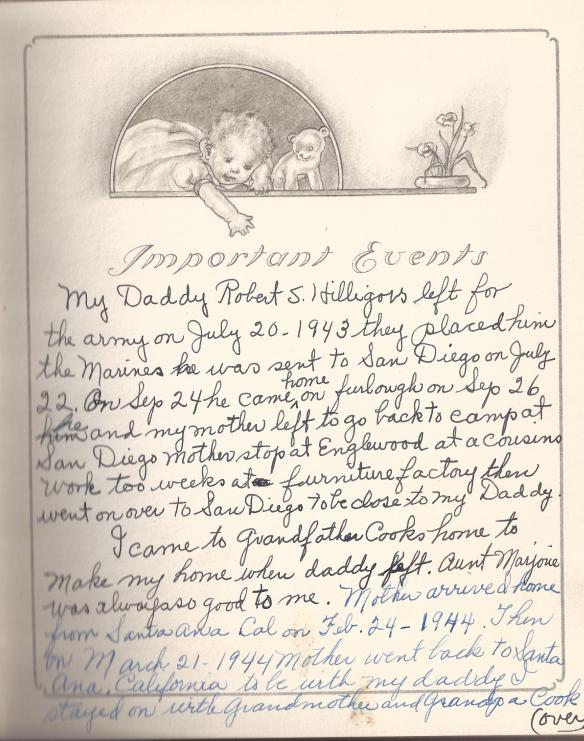 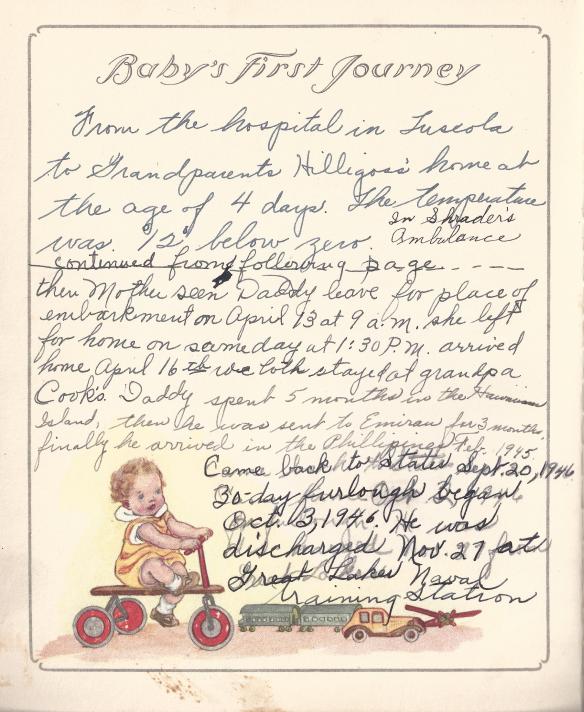