“I never doubted my ability, but when you hear all your life you’re inferior, it makes you wonder if the other guys have something you’ve never seen before. If they do, I’m still looking for it.” Henry Aaron 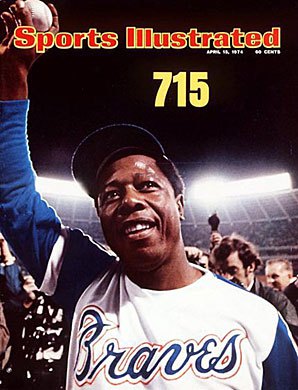 Henry ‘Hammerin’ Hank’ Aaron was born 80 years ago today in Mobile, Alabama. Aaron’s family was large and modest and Aaron spent many years as a child helping his family pick cotton and developing the strong wrists and forearms that later allowed him to hit a baseball with such power and authority. Aaron loved baseball from an early age, but his family could not afford proper equipment so he used items he found in the streets and hit bottle caps with sticks. After excelling in football and baseball in high school, Aaron caught the attention of scouts in the Negro Leagues. He started to play as a 6 foot, 180 pound, shortstop. After relocating to Indianapolis, Indiana, eighteen-year-old Aaron helped the Indianapolis Clowns win the 1952 Negro League World Series. As a result of his standout play, Aaron received two offers from MLB teams via telegram; one offer was from the New York Giants, the other from the then Boston Braves. Years later, Aaron remembered, “I had the Giants’ contract in my hand. But the Braves offered fifty dollars a month more. That’s the only thing that kept Willie Mays and me from being teammates – fifty dollars.” What a powerhouse that lineup would have been for years and years with two of baseball’s finest. Aaron and Mays were two of the last players to make the transition from the Negro Leagues to the Major Leagues before they were disbanded due to integration.

I won’t rehash Aaron’s entire career or all of the records but here are a few that standout:

– 755 career Home Runs, currently second only to Barry Bonds whose career is highly suspect at this time due to the alleged use of performance enhancing chemicals 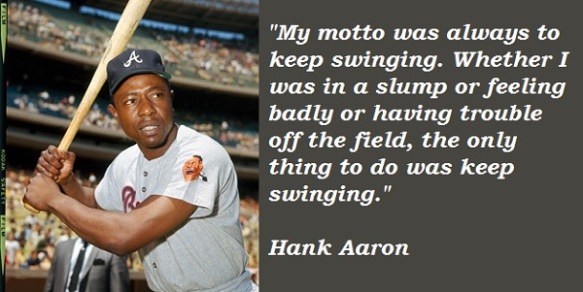 I have had a wide array of heroes in my life including writers, musicians, artists, family members and sports including Kurt Vonnegut, Miles Davis, Bruce Springsteen, Lou Gehrig and Henry Aaron. Henry broke Babe Ruth’s record for home runs months before I was born in 1974. Starting in 1973, Aaron received hate mail by the sack full, death threats and public taunting by narrow, small-minded and mean-spirited racists who were offended that a black man would try to break the most sacrilegious record in baseball held by a white man. Aaron did what he always did best, put his head down, worked hard and kept on swinging while he kept his pride, dignity and humanity at the fore front. Since his playing days were well over by the time I was cognizant, I think what attracted me to him as a role model was his quiet dignity and the way he carried himself as a man. With his wit, charm, personality, quick smile and decency, Aaron gives those who watch him a path to follow and try our best to follow in his footsteps. His humor, grace and humility can best be defined by his self-evaluation of his golf game, “It took me 17 years to get 3,000 hits in baseball. I did it in one afternoon on the golf course.” Below is a video clip of Aaron appearing on the Late Show with David Letterman in 1982, shortly after he was elected into the Hall of Fame. And he tells of hitting his famous home run and the White House invitation he received from President Nixon.

In Search of The Hammer

About 10 years ago, I was reading a profile on Aaron and learned that he owned and operated a Krispy Kreme Donut location a few miles from Turner Field in Atlanta, Ga where the Braves play their home games. According to the article, on most days, Aaron stops in the store on his way to Turner Field where he exercises and holds an executive position with the team. On his daily stops, he checks on operations, talks with staff and stays involved. Knowing that there was a chance we could meet a legend and maybe have a donut and coffee with him, I asked my dad and Uncle Rick if they wanted to go on a road trip for southern sights, and was answered in a resounding affirmative.

We made our way from St.Louis down to Atlanta, a drive of only 8 hours with Rick in the back seat reading a Kinky Friedman novel and dad narrating the entire trip on all things historical, political and memories from his own trips to the south including an early family Christmas day trip through Atlanta on their way to Florida years ago, “I remember all the kids riding their bikes out in the streets that morning on their new Christmas presents.”

Up early the next morning, we got some vague but promising directions from a maid at the hotel. After driving around for a few hours looking for one of many variations of a street, avenue, boulevard or place with Peachtree in the title, we pulled into the Krispy Kreme parking lot around 9:00. After buying our donuts and drinks, we sat around for a while, eyes peeled to the doors and heads jerking everytime someone walked in. The manager sauntered by, asked us if we were Braves fans and after telling him we were Hank Aaron fans, he told us hank had already been there today, really early in the morning and wouldn’t be back. After pouting for a good while and blaming all of our woes on Rick as we often do, we headed for the stadium to at least get some good scenery. We found the parking lot that covers what used to be Fulton County Stadium and found the spot where Hank’s record breaking blast from 1974 stands.

We also drove downtown and visited the boyhood home of Mrtlin Luther King Jr and the MLK Center with it’s history and resting place of the civil rights leader. The next day we headed for points south and visited Warm Springs, Ga where President Franklin Roosevelt often visited in an attempt to alleviate his polio symptoms in the warm natural waters. Roosevelt’s Little Whitehouse and museum tucked in the woods was a treasure to witness and to think of the beautiful surroundings that FDR enjoyed on his many trips and the trees he saw before he had his fateful stroke.

We went in search of a hero and legend and even though we came up empty on that score, we saw many other great things and enjoyed moments together as family and travelling companions. We didn’t get to meet Hank, but we talked about him a lot and that is stuff that legends and folk heroes are made of. Looking for one thing, we found others in their place. Searching for one road, we travelled a detour on the blue highways. All roads lead somewhere. And some are blazed by our heroes. Thanks Hank and happy birthday to one of the finest, classiest players and humans to grace the earth.

“Trying to throw a fastball by Henry Aaron is like trying to sneak a sunrise past a rooster.” Curt Simmons