Springsteen and Devito; The American Bard and The Lorax

In 2008, Bruce Springsteen was elected to the New Jersey Hall of Fame along with such luminaries as Albert Einstein, Toni Morrison, Harriet Tubman and Frank Sinatra. Springsteen was born and raised in blue-collar Freehold, New Jersey, but came of age, both physically and musically, in nearby Asbury Park, New Jersey. Also, from Asbury Park is actor Danny Devito who inducted Springsteen during the ceremony with these words,

Then Springsteen ripped into a live version of his classic, “Glory Days” with Devito accompanying on vocals and air guitar. In 2010, Devito was inducted into the same hall, and who else would be on hand to induct his friend but Springsteen. After which they reprised their on stage performance.

How fitting then that the two New Jersians, both from hard-working, humble roots, have new projects coming out in the same week. Bruce Springsteen’s 17th studio album, “Wrecking Ball”, is set to be released Tuesday, March 6th and Devito is starring in the new Universal Studios production of “The Lorax”, based on the classic Dr. Seuss book.

Each project addresses timely, hard-hitting issues, one on the current economic quagmire facing the nation and its’ suffering citizens, and the other addresses environmental degradation at the hands of greed and moral turpitude. Both works focus on difficult topics, but ask of us, the audience, an important question: What can we do to help solve the problems facing all of us.

While a rock/folk/urban music album and a “children’s” movie may not seem to have a lot in common at first glance, there is more under the surface that we can learn from, but only if we are willing to “listen” hard. A similar idea came to me recently while reading “Woody Guthrie: A Life” by Joe Klein who quotes from John Steinbeck in describing Guthrie’s songs, “He sings the songs of a people and I suspect that he is, in a way, that people…..there is nothing sweet about Woody, and there is nothing sweet about the songs he sings. But there is something more important for those who will listen. There is the will of the people to endure and fight against oppression. I think we call this the American Spirit.” 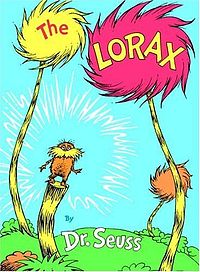 Just for a quick review for the reader, if there are any of you out there swimming through a tidal wave of binary detritus. The Lorax movie, with Devito as the voice of The Lorax, the “hairy peanut”, who speaks for the trees, is based on the book by the same name, written by Theodore Geisel, aka Dr. Seuss, and  first published in 1971. It tells the tale of the Onceler who destroys a beautiful forest of Truffula trees and all the living creatures who once lived there in the pursuit of profits by selling Thneeds that everyone needs, which are made from the fuzzy tops of the Truffula trees. After the Onceler is done chopping down all the trees in the name of “biggering his roads and biggering his factories and biggering his money”, the Lorax takes leave, and all that is left is an ugly, blackened, scorched earth with no Barbaloots or Humming fish to be found.

The Onceler tells a young boy who is on a moral quest to find the truth, “All the Lorax left here in this mess was a small pile of rocks, with one word….”Unless.” Whatever that meant, well I just couldn’t guess. That was long, long ago. but each day since that day, I’ve sat here and worried and worried away. Through the years, while my buildings have fallen apart, I’ve worried about it with all of my heart.”

At the end of the story, on a sign of hope, the young boy asks the old Onceler hermit what happened and what he can do, the Onceler gives him the last remaining Truffula seed with instructions to “plant a new Truffula, treat it with care, give it clean water and feed it fresh air.”

Whereas “The Lorax” looks at the dangers of “progress” and destruction of the physical environment, Springsteen’s Wrecking Ball album takes a hard look at the scorched earth that remains of our “shackled and drawn” economy and the millions of suffering citizens. The album opens with an anthemic “We Take Care of Our Own” that is an upbeat mix of rock and flag waving that will surely be mistaken by some, just as Born in the USA was mistaken back in the 80’s, as patriotic and jingoistic instead of a scathing indictment of the current social and governmental failure to care for our citizens.  Instead of making a bold proclamation, the song and lyrics are asking a question,” Do we really take care of our own?”, and by listening to the rest of the album, his answer is steadfastly….. no!!!

The entire album plays as a straight Greek tragedy, but the story here is not a fairly tale or a play written long ago. It is a modern tale of hard times for hard-working people, to paraphrase Pete Seeger, many of whom have been left behind in the wake of the economic depression that has occurred in the last 5 years here in America, and all around the world. The first half of the album tells the story of the difficult, almost soul crushing times and circumstances facing many, through songs such as Easy Money, Shackled and Drawn, Jack of All Trades and This Depression. The second half the album with the songs Wrecking Ball, Rocky Ground and We Are Alive leads us to a more hopeful place, a place where we live up to the ideals we hold in our hearts.

In “Death to My Hometown”, a hard charging, Irish rocker, Springsteen sings from the view-point of a citizen who has lost all that is near and dear during the second great depression. The narrator has lost his job and his home through normal channels of modern business wherein jobs are stripped away and sent overseas or just stripped away altogether, leaving a wide path of emotional, social and communal destruction in its wake. Springsteen sings:

Now no cannonballs did fly

No rifles cut us down

No bombs fell from the sky

No blood soaked the ground

But just as sure as the hand of god , they brought death to my hometown

They destroyed our families and factories,

And they took our homes

In answer to these actions, committed by an enemy he cannot see, the narrator tells his assembled audience of fellow citizens that the enemy will be back again and to get ready.

Now get yourself a song to sing

And sing it til’ your done

Sing it hard and sing it well

After the last lyric is sung , there is  a sound of a shotgun being loaded (actually an AK-47 per album liner notes) and an explosion of drums which comes across as a call to arms. Not a call to become armed and loaded and to take violent action, but a call to link arms in solidarity to fight the bastards, whoever they might be. When Springsteen sings about getting a “song to sing and sing it til’ your done”, it stands as a call to action for all of us. Or as a form of call and response. A call for each of us to find a “song”, whatever that might be for each of us as individuals to respond in the best way we can based on our abilities, whether it be an actual song if you have any musical talents, or to write a letter or an opinion piece, or to take better care of friends or family, or to take political action or to organize others to help fight for a cause near to your heart. Find your song and sing it well and sing it hard my friends.

Yes, on one level, Wrecking Ball and The Lorax are talking about economic and environmental woes and the dangers of venture capitalism and immoral companies. But, if you follow the earlier advice of  Steinbeck and listen harder, you might hear the sound of the American spirit. A spirit thundering down the tracks, and a spirit that says, in Walt Whitman’s mighty yawp,”We Are Alive.”

In asking if we take care of our own, you might find the answer is no. Then you might ask yourself, what can I do to help others around me who may be suffering. But, more importantly, what help do I need, which often times can be even harder to admit to others or to yourself.

You may not find the answers right away or, possibly, ever, but just by asking the questions and searching for solutions or reaching out for help, you can take the first step on a long journey to a better place, a land of hope and dreams. Until then, plant your own “Truffula Seed”. Get yourself a song to sing and sing it hard. For as the Onceler tells the young boy in The Lorax:

nothing is going to get better.

(Editor’s note) ***The Lorax is currently playing in theaters, and is highly recommended by someone who saw it this weekend with his family. The movie is quite enjoyable even for those of you who don’t enjoy animated movies. Wrecking Ball comes out March 6th. Check out the rave review from Denis Lehane, author of Mystic River and Gone Baby Gone:

“Wrecking Ball is possibly Bruce’s best album in a quarter century, for what my opinion’s worth. It’s bracing and subversive and sonically fearless. It’s going to give voice to a generation, certainly to an era. In that regard, I would put it shoulder to shoulder with Born To Run, Highway 61 Revisited, Exile on Main Street, London Calling and American Idiot. Indelible. I stand in awe of Bruce’s ability make music this angry and relevant and authentic at any stage of his career, nevermind 40 years on. Thank God for him.”

4 thoughts on “The Wrecking Ball Comes to Thneedville”