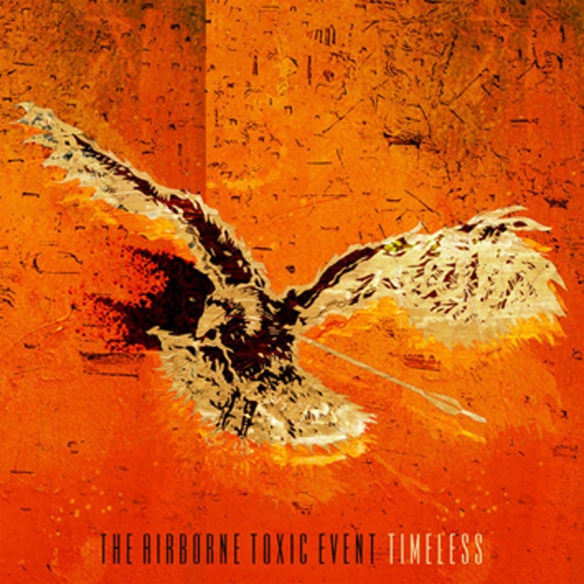 “Elvis fell apart with grief when Gladys died. He fondled and petted her in the casket. He talked baby talk to her until she was in the ground. It seems fairly certain that Glady’s death caused a fundamental shift at the center of the King’s world view. She’d been his anchor, his sense of security. He began to withdraw from the real world, to enter the stage of his own dying.” White Noise, Don DeLillio

In 2011, The Airborne Toxic Event released their second album, All At Once, and the title track serves as a microcosm of the band’s sound, fervor, lyrical content and musical purpose. Standing as a musical metaphor for life, the song begins quietly with an uptempo guitar click clacking away like a clock passing time with keyboards lightly undercutting lead vocalist Mikel Jollett singing:

We were born without time/Nameless in the arms
Of a mother, a father, and God
When the world would wait for us/A thousand years in the crush
Of our eyes, fearless, in awe/So quietly we’d fade into sleep
With nothing on our mind

And then, just as in the struggle of life he describes, the song takes off with a galloping, pounding drum beat and bass line, the music moving along rapidly propelling us along just as in life, ‘wishing for more time’ but just wasting our opportunities. In the third verse as the waters rise around us the rhythm builds and builds as the drummer smashes the cymbals over and over, Jollett sings:

We get old all at once/And it comes like a punch
In the gut, in the back, in the face/When it seems someone cried
And our parents have died
Then we hold onto each other in their place
Yeah, I feel the world changin’ all at once/ I guess it’ll be OK

With the final verse, the tempo and levels slow and grow smaller as ‘we all hope that someone was looking down as we return our bodies to the ground.’ It started soft and quiet just as in childhood before we understand the concepts of time and mortality, goes crashing through the bulk of the song in a mad dash to the quiet end. Jollett as lyricist and the band seem to have a deft, great feel for the fears that we all have but most people and musicians refuse to address or even acknowledge.

The band has released a four song EP, Timeless, as a precursor to the April 16 release of their third album, Such Hot Blood. The four tracks released will be included in the full album and include The Secret, Timeless, The Storm and Safe and play as an epic take on the same themes that have run through all of their work; topics of life,the passing of time, love lost and found, and the pain, wonder and puzzlement that is human existence. The band consists of Jollett on guitar and vocals, Steven Chen on lead guitar, Noah Harmon on bass, Darren Taylor on drums and Anna Bulbrook on viola and vocals. They often also use orchestration of some level to add strings and backing heft. The overall sound is that of a 21st century Phil Spectoresque ‘wall of sound’ with Jollett’s vocals reminding me somewhat of a plaintive Adam Duritz of Counting Crows but with more soul and muscle ala Bruce Springsteen.

Springsteen’s influence can be heard in the big, full sound that fills in the spaces when needed but often packs a rock hard punch, and that is no coincidence. In a recent Rolling Stone interview by Steve Baltin, Jollett says he watched recent documentaries on the making of Springsteen’s classic and learned some necessary lessons on artistry. Born To Run and Darkness on the Edge of Town albums. (The movies Wings For Wheels and The Promise, respectively, are both fine films made by Thom Zimny and well worth the investment in time and attention for those interested in the process of artistic production, whether you are a fan of Springsteen or not). Jollett says,  “I asked myself, ‘What would Bruce Springsteen do?’ If you want to do something that’s important, you can’t fake it. I remember thinking, ‘You can do a lot more: you can learn to play piano for real, you can learn to sing for real, you can take what you know about songwriting and forget it and then remember it. You can learn other forms, you can rewrite your lyrics 20 times so they’re exactly right. So yeah, it was a choice to try and grow and to push to grow.”

The band takes their name from the above quoted novel, White Noise, which focuses on college professor Jack Gladney, teacher of Hitler studies at a small liberal arts school, and his family. Jack and wife Babette live their lives with a soul crushing fear of death with such force that Babette prostitutes herself with a drug manufacturer rep to obtain a test drug called Dylar in the hopes to treat her fear. The book is split into three acts, the second of which is The Airborne Toxic Event in which an industrial accident unleashes a black chemical cloud that floats over their city and forces Jack and Babette to confront their fears. Jack describes the cloud as ‘ a towering black mass like a shapeless growing thing, a dark breathing thing of smoke.’

That black mass forms again with the EP’s four songs and may possibly form the “four corners” of the full album once it’s released. The four corners represent the sequence of songs used with vinyl LPs  and would have been the first and last songs of each album side. In many cases, the four corners of the album formed the foundation of the artist’s and the album’s musical, lyrical and meaning in content. This EP starts with The Secret, with siren-like keyboard sending out a warning or distress signal with Bulbrook’s viola adding a counter measure with a driving bass line underneath as Jollett sings:

The sound of the engine/The feel of the tires

Your hands on the rail/The smell from the tires

Streetlights and headlights on a road that goes nowhere

And somehow it always seems/Like you were waiting for something

But the secret’s out now

The secret may be out now in the song, but I am still trying to decipher what that secret is: who was driving that car that left the narrator behind, where are the fires and what is burning, where did she go, what is the something he’s been waiting for and what is the secret?

In Timeless, the narrative continues as the same “she” disappears into the darkness and the spurned lover can still feel her spirit in the room. The narrator wonders ‘what is this whole in my heart that I cannot abide.’ Jollett sings:

I feel like I could live forever with you, my love

Like many of their songs, the tempos, levels and sound arrangements perfectly match the lyrics and vocals and build the narrative and meaning of the songs. On this one, it starts with a mellow sound but builds throughout the song and goes into a funky bridge with heavy guitar chords backed by matching orchestration that works well as the drums crash and fade out.

In The Storm, the missing lover comes back in the door after 25 days, or 25 weeks, or 25 months and announces they are here to stay and the worst of the storm is over. The actual amount of time is unclear because the road opens before the narrator and goes on forever so the concept of time doesn’t really exist and speaks to the heart of many of their songs. The final track of the EP, Safe, is replete with Springsteenesque influences, and I was left with the feeling that this is an updated, 21st century version of Thunder Road as it opens with a Roy Bittan like piano line, tinkling away as Bulbrook’ viola sways lightly in the background. I imagine Springsteen’s Mary on the front porch as the screen door slams and the driver asks her to get into the car but advises that the ride, it ain’t free.

Let’s not make it a thing, it’ll be ok babe

The tempo speeds up quickly with the viola rapidly calling out as a siren, the drums ticking away the time just like Al Jackson’s drums on Otis Redding’s Try A Little Tenderness, and the guitar and bass clashing together as the drama builds and the two lovers decide if they will take that ride together. Then Bulbrook begins singing in a haunting, ghostly fashion, “Do you really want to hear it, did you really think this was real?” Jollett sings back that they can’t slow down now since it’s not safe for travel. Finally, they get to an unknown location and arise from the car and “she” leaves her bag in the backseat and he sees that as a sign of love and confirmation of his hopes. Act four of the drama has come to an end, but questions abound for characters and listeners alike.

In The Promised Land, one of Springsteen’s penultimate songs that encapsulates much of his career’s intent, his character faces down the storm of life as he watches ‘a black cloud rising from the desert floor and packs his bag and heads straight into the storm.’ Airborne Toxic Event faces that storm of life and death with each album and each song with pride, strength and determination, and I highly anticipate the release of the completed album so I can hear them do it again with ‘Such Hot Blood.’