I celebrate myself, And what I assume you shall assume,

For every atom belonging to me as good belongs to you.

I loafe and invite my soul,

I lean and loafe at my ease, observing a spear of grass.

The spotted hawk swoops by and accuses me…he complains of my gab and my loitering.

I too am not a bit tamed…I too am untranslatable,

I sound my barbaric yawp over the roofs of the world. 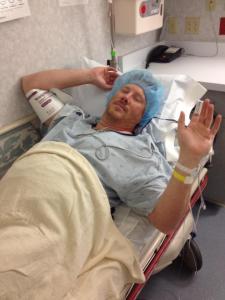 “May you live everyday of your life.” George Eliot

Two weeks ago, I was rushed into the emergency room for life threatening surgery and came out on the other side unharmed and ready for battle. So, much like Walt Whitman, I too celebrate myself today and from here on out, I plan on sounding my barbaric yawp over the rooftops of the world and to live everyday of my life. OK, enough already I hear you say. It wasn’t that bad was it? No, it wasn’t and I may have exaggerated a teensy little bit. I wasn’t rushed to the emergency room for life threatening surgery. Rather, I was driven to the hospital by my lovely wife for a scheduled out-patient surgery for my sinuses. But to me it felt like life or death since in my previous appointment with my surgeon he advised that the risks of operation included death, loss of eyesight or even an eyeball all together, bleeding from the brain, etc etc. You know like little, happy things.

During the entire 45 minute drive to the hospital and on through the check in process and the changing of clothes into the dreaded reverse kimono and meetings with the surgeon and the anesthesiologist, I kept insisting to Kim that I wasn’t feeling well and should just cancel and reschedule for another time, much later in the future. This ploy received no sympathy from my masochistic spouse who would rather see me writhe in pain and dread than allow me the chance to live another day. I was a desperate man on that day and the hospital that day was “angry my friends.” My fears were confirmed by one of my nurses who told me most people don’t get concerned about surgery but the natural human instinct is to be fearful anytime death is possible, fight or flight. See…..I told you so. To say the least, the powerful and commanding Kim was unswayed. Much like the sensei of the Cobra Kai dojo from The Karate Kid, she showed no mercy. I wanted to flee and tried to get up from the cot I laid on even as I was tied down by tubes and lines of every kind and all she did was ‘sweep the leg.’ I even went so far as to act as though I did not know where my wallet was and asked to go check in my jacket that hung in the locker across the hallway. I hadn’t so much as swung my left leg over the side of gurney when she was back by my side, looking down at me with pity in her eyes and a shake of her head. I felt like Ralph Macchio laying on the tournament floor clasping my hands around my wounded knee.

During the surgery, the weather was raging outside, in the midst of one of the worst springs we have seen, and the main power went out and the backup generators kicked in as planned and there were no hitches. But knowing that I was insistent that I was going to die, and knowing that she was the one who refused to let me leave, Kim spent much of that time feeling incredible guilty and worried that some major catastrophe would occur while I laid on the operating table. For obvious reasons, I would not have known any better, but boy wouldn’t she have felt bad if something bad had happened to me?? While my soul was bouncing across the universe, Kim would have been forever forced to introduce herself as the one who had marched her husband to an early grave. She should be forever thankful to Thomas Edison and Commonwealth Edison Power for modern technology and the electricity grid.

Much to my chagrin, the surgery went well, very well compared to some of the horror stories I have heard from friends who had similar surgeries done. Much of this can be explained by my suregoen and ENT doctor Arkadiush Byskosh, MD. B Dog as he likes to be known, OK actually not, I just made that up, is the finest, most caring and professional doctor I have had the experience of meeting in all my years including doctors of my children, spouse, parents, etc. They should cast a bronze model of him to use for all others in the profession as well as taking video of his office nurses in action as they epitomize the proper techniques of medical staff. God bless you Dr. Byskosh. No packing of the sinus cavities for me or major complications. After only two weeks, I feel about 85% healthy and can already tell my breathing is better which will lead to better living and sleep once everything is fully healed.

In the big scheme of things, my surgery was nothing and I am just having a throw, as some people around the globe might say, at my own expense and how ridiculous my mind can be sometimes. Everyday, people all over the world have physical conditions and ailments that keep them from fully enjoying life. Millions of people struggle for food, shelter and clean water on a daily basis and people are killed every second of every day for one reason or another, so I have no reason to complain and have every reason to be grateful for having a good life surrounded my a loving wife, two great kids, father, mother, brothers, uncles, aunts, cousins and caring friends.

Louis CK has a new HBO comedy special entitled, Oh My God, in which he talks about how good we have it here on Earth and how we don’t even recognize it most of the time. He points out that for trillions of miles around us in every direction in space, life sucks to the point where your eyeballs are sucked from your head. But here on Earth, we have water and food and people. And we get to eat bacon and cheese, we get to have friends, and we get to have sex and we get to enjoy an innumerable amount of small things in life that we often times miss because we are busy whining about our lives and feeling sorry for ourselves. Yes, life throughout the universe is non-existent, so I am excited to once again ‘celebrate myself’ and the life I have and to enjoy it everyday and to sound my mighty yawp, like a sweaty toothed mad man, across the rooftops of the world. YAWP…YAWP…YAWP!!!!!!!