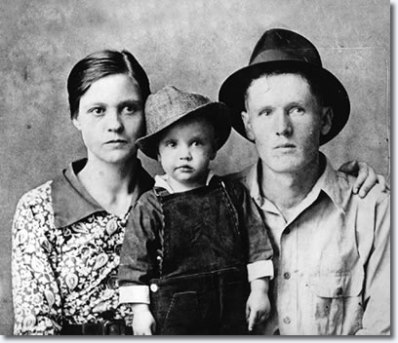 “Believe in the beauty of your dreams.” Eleanor Roosevelt

As a way of introducing myself with my first blog posting, here is a list of just a few of my heroes: Chuck Berry, Robert Kennedy, Louis Armstrong, Abraham Lincoln, Miles Davis, Kurt Vonnegut, Elijah Lovejoy, Jane Addams, Larry “Studs” Terkel, Eleanor Roosevelt, Bruce Springsteen and Elvis Presley. Yes….that Elvis Presley. The man who sadly, now is seen by many as a punch line to a joke about an overweight, doped out gun toting recluse who died in an undignified manner. A man whose death set an unfortunate precedent for many other celebrities, including Michael Jackson and Whitney Houston.  But to me, Elvis was a beautiful dreamer and a musical and cultural trailblazer with a moral to teach all of us.

Just read what renowned rock critic Dave Marsh wrote in his profound work simply titled, Elvis, “Somewhere, out of all of this, Elvis began to seem like a man who had reached some conclusions. And so he was made into a god and a king. He was neither- he was something more American and, I think, something more heroic. Elvis Presley was an explorer of vast new landscapes of dream and illusion. He was a man who refused to be told that the best of his dreams would not come true, who refused to be defined by anyone else’s conceptions.

“That is the goal of democracy, the journey on which every prospective American hero sets out. That Elvis made so much of the journey on his own is reason enough to remember him with the honor and love we reserve for the bravest among us. Such men made the only maps we can trust.”

I take the name of my blog from an address. 706 Union Ave.An address not nearly as well known as 1600 Pennsylvania Ave,10 Downing Street, or 11-21 Wall Street, but ultimately 706 Union Avenue is significantly more powerful than all others in terms of social and cultural meanings. 706 union Ave, Memphis, Tennessee, USA is the home of the original Memphis Recording Service that ultimately became Sun Records, proving ground of musicians from all over the country and whose blend of gospel, country, blues, bluegrass, and rhythm and blues became rock and roll, one of America’s greatest art forms and one of our most important exports, behind only democracy and jazz.

Sun Studios was founded by the visionary Sam Phillips, a man who wanted to broaden cultural and social integration by combining the music of both black and white into a new form of music that would reach everyone. Phillips was a southerner who chose Memphis to setup his business as it was a focal point of national migration, travel and commerce. Virtually all of the artists who he discovered came from the deep south and brought their varied music roots with them and formed a rich and diverse musical landscape.

Over a brief span of roughly 10 years, Phillips recorded a wide range of musicians starting with a very young Riley “BB” King, Jackie Breston, blues legend Howlin’ Wolf, Elvis Presley, Johnny Cash, Rufus Thomas, Jerry Lee Lewis, Junior Parker, Carl Perkins and Roy Orbison.  Jackie Breston’s Rocket 88, an ode to a hot Oldsmobile automobile, is viewed by many as the first rock and roll record with  simple boogie riff with underlying piano and sax instruments. Described in Good Rockin’ Tonight as “…raucous, unbridled energy that certainly foreshadowed much that was to follow, although arguably it owed a greater debt to what had come before.”

Phillips said that he was trying to open up an area of freedom within the artist himself. Upon hearing Howlin’ Wolf for the first time in the studio, Phillips stated, “When I heard him, I said, this is for me. This is where the soul of man never dies.”

Elvis Presley’s recordings for Sun Records included Mystery Train, That’s All Right Mama, Good Rockin’ Tonight, Baby Let’s Play House. These are some of the most important musical recordings in American music that helped start the new form of rock and roll but also played an integral part in social and cultural changes including, most importantly, the civil rights movement. Phillips has been quoted endlessly as stating he wanted to find a white singer who could sound black in order to reach white audiences with what was then termed “race music.” In Elvis he found the perfect candidate. Many listeners and radio stations were fooled into thinking Elvis was actually black and many stations refused to play his records because of that reason. Elvis recorded with Sun Records until 1956 when Phillips sold his contract to RCA records and Elvis became “The King.” (Ironic since before recording with Sun, Elvis was driving a truck for Crown Electric.)

But with his swaying hips and curling lips and his performances on national television, including Dorsey Brothers, Steve Allen, Milton Berle and more famously the Ed Sullivan Show, Elvis reached millions of fans and became the most popular American folk hero of the 20th century. For what you may not know is that Elvis Presley came from one of the most humble backgrounds. He was born to poor southern parents, Gladys and Vernon, in a shotgun shack inTupelo,Mississippi during the heights of the Great Depression. His father struggled so hard to provide for his small family that he tried to forge a check to buy groceries and was sentenced to three years in a state penitentiary, during which time Gladys took in laundry and tailoring to make ends meet.

It was there in East Tupelo, that Elvis grew up on the poor side of town amongst both black and white. And it was there that he was exposed to the music that would inform him for the rest of his life and career and helped ingrain all the various components that made up his music later in life. He heard blacks play their blues on their front porches. He heard and sang the gospel songs he grew to love while attending church every week with his parents. He listened to the Grand Ol’ Opry and it’s eclectic mix of country, gospel and bluegrass on the radio every weekend. On his eleventh birthday, he asked his mom for a rifle, but Gladys was afraid of the rifle and she bought him a guitar instead. The rest is history as Elvis climbed from the depths of poverty and reached the heights of worldwide fame and the continued devotion and adoration of fans  who travel the world over to Memphis to pay their respects, 35 years after his death.

In 1970, as an introduction to the great song, Walk A Mile in My Shoes, Elvis quoted part of an old Hank Williams song:

You never stood in that man’s shoes, or saw things through his eyes

Or stood and watched with helpless hands, as the heart inside you dies

So help your brother along the way, no matter where he starts

For the same god that made that made you, made him too

These men with broken hearts.

At the top of this post is a picture taken of Elvis with his parents. In the picture, Elvis is maybe three years old and he stands on a table with Gladys and Vernon on either side. He is wearing a pair of worn, soiled overalls and a fedora hat pulled down at a jaunty angle. In his face, you can see traces of the pouty lips and the darkened, bee stung eyes that would eventually make him the second most globally recognized face, second only to Mickey Mouse. It is a picture that symbolizes how far he came in life. It also symbolized how far many other came during that same time. As his story is very similar to that of my own families as both sets of my grandparents came from very similar backgrounds around the same time. What you can see in those faces is a burning desire to live a better life and to provide better dreams for their kids. Even though my grandparents and parents never achieved world wide fame, they all fought the good fight and came to embody the meaning of the American Dream.

In his extraordinary work on Elvis, Careless Love, author and music historian, Peter Guralnick writes “…in the end, there is only one voice that counts. It is the voice that the world first heard on those bright yellow Sun 78s, whose original insignia, a crowing rooster surrounded by boldly stylized sunbeams and a border of musical notes, sought to proclaim the dawning of a new day. It is impossible to silence that voice…”

To tie this all together, in 1978, after enduring a struggle for his own artistic freedom with his first manager, Bruce Springsteen wrote a song called the Promised Land for the album, Darkness On The Edge of Town. Whether directly or indirectly, it shared the same title of a song written by one of his, and countless other’s, musical heroes, Chuck Berry, a man from a poor family living in a segregated St.Louis, Mo. Chuck’s version, written in 1964 and possibly influenced by Martin Luther King’s I Have a Dream speech in 1963, was about a poor southern boy dreaming of a better life in California and struggling to make his way across the country in search of that journey. In the later stage of his career, Elvis recorded Berry’s Promised Land and turned it into one of his last great rock recordings.

After the failure of the Bay of Pigs operation in 1961, President Kennedy stated, “Success has a 100 fathers while failure is an orphan.” Rock and roll was and remains a great success on inummerable levels, not a failure by any definition. And Elvis Presley and Chuck Berry, in my mind, were two of the most influential “fathers” of rock and roll, one of the great unifying forces in modern American life and one that greatly influenced the civil rights movement. Elvis’ first recordings took place in a small Memphis studio called Sun Records which, ironically enough, was situated at 706 Union Ave. We could use a little more unity in our communities, in our states, in our country and across the world today.

The sooner we can all recognize the need for understanding our common problems, discussing them in an intelligent and fair manner and attempting to find some common ground, the sooner we can start living up to the ideals our nation stands for. The ideals that caused so many to risk it all, to make that journey across the water so they could start their hopeful wandering. Oh, I believe in the Promised Land.

I will leave you for now with a sign off that can be traced to Woody Guthrie, but one I first heard from another of my literary, cultural heroes, Studs Terkel who signed off from his radio show everyday with, “Take it easy, but take it.” 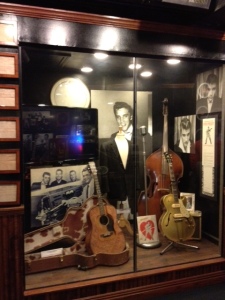 Sun Studio museum, Memphis, Tn. Notice the leather guitar cover Elvis used in the 50s to keep his belt from scratching the wood when he danced on stage