Birdman or (The Unexpected Virtue of Ignorance)

Coming through, I gotta a package here people. Michael Keaton from Birdman, walking down Broadway in his undies

I went to see Birdman last week with my good friend Dave, The Reverend Mr. Black, and after the movie ended, we watched the credits waiting for what he said might be the ultimate homage to super hero movies which would be a quick snippet of footage leading viewers towards the next series installment such as appears at the end of The Avengers. He asked me to reel off some adjectives to describe the movie. But all I could jokingly verbalize was the word heavy….heavy man… because I was trying to wrap my head around the movie and still am five days later.

The film is visually stunning as it is made up of several long shots stitched together as the camera follows the actors and stage crew around backstage of St.John’s theater in NYC where Riggan Thomson (Michael Keaton) is a washed-up Hollywood actor who once played the superhero Birdman in three blockbuster movies, before leaving the multi-billion-dollar franchise. More than 20 years after Birdman, Riggan wants to reinvent his career by writing, directing, and starring in a play, an adaptation of Raymond Carver‘s short story “What We Talk About When We Talk About Love“. Throughout all of this, Riggan from time to time hears his voice as Birdman either mocking or bolstering him; he also performs small feats of telekinesis and levitation when he is alone. 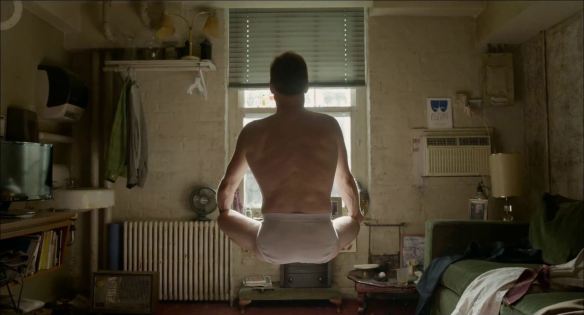 In the voice of Birdman, “How did we end up here? It smells like…balls.”

Co-writer and director Alejandro G. Inarritu, director of prior films Babel and 21 Grams, wrote the script specifically for Keaton and sent it to him to read. According to Keaton who recently appeared on Letterman, he read it and called the director and said, “Are you making fun of me?” Keaton starred in the first two Batman movies but rejected the lead role in the series’ 3rd installment along with a reported $15 million dollars. In Birdman, Riggan is asked by a critic if he’s not just doing this production so he can’t be accused of being a washed up actor of comic book films and he responds, “That’s why 20 years ago I said no to Birdman 4. “As a child, I grew up watching Keaton star in films including my favorites, Mr.Mom, Gung Ho, Night Shift and of course Beetlejuice. While he has been acting on a regular basis since walking away from the Caped Crusader, he is probably known by most young viewers today as the voice of Chick Hicks from Cars and Ken from Toy Story 3.

In Riggan’s dressing room, on his mirror is taped a quote, “A thing is a thing. Not what is said of that thing.” This concept speaks to me as an overriding theme of the movie, story and philosophy. In one great scene, Riggan has a confrontation with his daughter Sam, played by Emma Stone, who he employed after she was released from rehab as his production assistant. Riggan tells her that this play is the first time he’s been able to do something important. “Important to who”, she asks and then tells him that he and his “art” are not important to anyone just like no one else in the world is important and he better get used to it. Ouch!!! For an actor struggling with issues of ego, celebrity, and popularity versus art, coming from his daughter, these comments left a visible impact on his face and psyche. A thing is a thing reads to me as an argument for intrinsic, inherent value versus social or critical value. As an artist, if you want to make a movie, play, story, poem, etc, you craft it for the value of the act and end result itself and how that speaks to you the artist, not the praise or criticisms of viewers and critics.

Which leads to my favorite scene of the movie. After a preview of the play, Riggan and fellow actor Mike Shiner, played by Edward Norton as a narcissistic, pain in the ass ‘serious actor’, go into a bar for a drink. Shiner looks around the bar and says to Riggan, “See that lady at the end of the bar who looks like she just licked some homeless guy’s ass?” Riggan, after being accosted by a passing family for a photo with “the guy who used to be Birdman”, sees the lady and responds,” Jesus, she does look like she just licked a homeless guy’s ass. The lady in questions is the drama critic for The New York Times who informs Thomson that, come opening night, she will destroy his efforts and close down his play. Why? Because she claims he, and by association many other film stars who have turned their efforts to drama on Broadway, are children, not true actors who are taking up valuable theater space that instead should be used for productions of more merit and value. Riggan explodes,informs her he is sacrificing everything with this production including his money and career, asks her what she has ever done with her life, grabs her notebook upon which she is writing her review and picks apart her writing, and finishes by telling her to shove her paper up her wrinkly…tight, old ass.

The writing in this exchange is sharp and seems very specific and possibly is a reflection of how Inarritu feels about culture critics in general and more pointedly, critics of his past films that have pointed out his self-importance and piety. And I wholeheartedly agree with him on this point. Professionals and lay persons abound with catty, negative comments on the artisitic works of others, but what have they ever done? Have they ever written a short story, play, poem? Have they ever learned a musical instrument and performed or recorded any songs? Have they ever written a script, directed a movie or acted on stage? Mostly, no, their efforts are saved for savaging the efforts of others. The only cultural critic I am aware of who made a successful transition into culture itself has been Jon Landau who began his career as one of the first rock and roll critics, writing for Rolling Stone and other publications, and then helped produced records for The MC5, Jackson Browne, and Springsteen’s Born To Run, after which he became Springsteen’s manager.

The same goes for government and politics. Talking head pundits on never-ending news channels and op-ed writers prattle on to eternity about politicians, government officials and civil institutions, but have they ever ran for elected office or served in a public role? Rush Limbaugh sits in his nice shiny studio, speaking into his golden microphone while collecting his $50 million a year for pontificating and blithering about what legislators should or shouldn’t be doing. Well, if you know so much, then why don’t you build a campaign organization, run for office and if you win, implement your great ideas. Until then, write a check and go to hell. I was reminded of Theodore Roosevelt’s speech, Citizen In The Republic, given in 1910, “It is not the critic who counts; not the man who points out how the strong man stumbles, or where the doer of deeds could have done them better. The credit belongs to the man who is actually in the arena, whose face is marred by dust and sweat and blood; who strives valiantly; who errs, who comes short again and again, because there is no effort without error and shortcoming; but who does actually strive to do the deeds; who knows great enthusiasms, the great devotions; who spends himself in a worthy cause; who at the best knows in the end the triumph of high achievement, and who at the worst, if he fails, at least fails while daring greatly, so that his place shall never be with those cold and timid souls who neither know victory nor defeat.”

The movie is very dark at times…..an actor is hit on the head by a falling light during rehearsals…..but also very funny, ie fight between Riggan and Norton’a Mike Shiner. But it is also touching in its depiction of private, personal moments between Riggan and his ex-wife and daughter. It touches on celebrity, ego and narcissism as well as social media. In the middle of a  preview performance, Riggan accidentally locks himself out of the theater while getting his robe wedged in the doorway, and after losing everything but his tighty whities, has to speed-walk  down a crowded Broadway in order to get back into the theater, where he finishes the preview to a confused and perhaps delighted audience. During his walk, people ask for autographs, take pics, yell at him that he is both great and that Birdman sucks.  The video of his speed walk becomes a viral hit with over 300,000 views within an hour. He becomes a sensation again through the power of a social media he had not liked and openly mocked up until that point. His daughter shows him the video and tells him, “This is power.” Indeed.

Michael Keaton will hopefully receive an Oscar nomination for this role and if I were allowed to vote would so in a heart beat over Bill Murray who is now appearing in St.Vincent. While Murrary does a great job amidst a fine ensemble including Melissa McCarthy and first time actor Jaeden Lieberher as Oliver Bronstein, I watched it with a smile of familiarity knowing Murray was playing a loose characterization of himself, of which we’ve seen many times over in prior films. St.Vincent is a fine film, well written, direct and acted and Murray has some heartbreaking scenes, but in Birdman, Keaton turns in his finest acting performance and I recommend you see it ASAP. Run to your nearest theater, or fly. if you have the wings of a superhero.