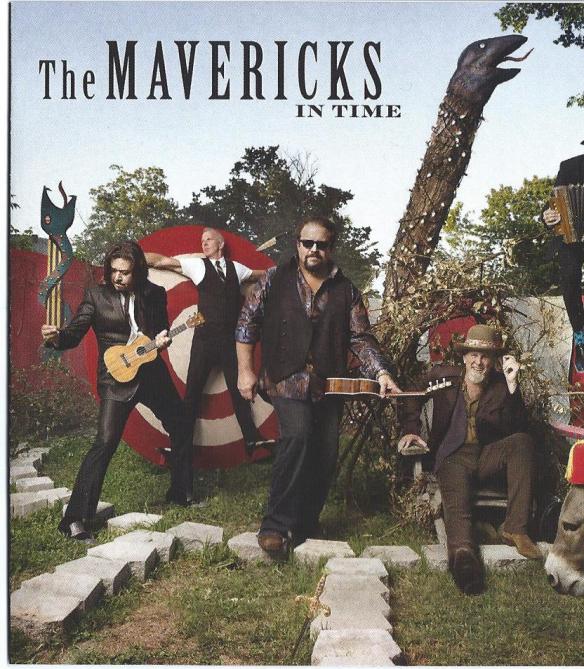 Rating: 4 out of 5 gold records on the wall

Like a lot of other music and bands that have become my favorites over time, I stumbled upon The Mavericks by happy accident. While driving around in 1999, I happened upon a review on NPR of a new tribute album coming out of country-alt-rock legend Gram Parsons entitled Return of the Grievous Angel which included covers from The Pretenders with Emmy Lou Harris, Gillian Welch, Wilco, Lucinda Williams, Steve Earle and The Mavericks, among others. I was stunned to hear The Mavericks bring The Flying Burrito Brothers song, Hot Burrito #1 to full, alt-country life with a blend of a steady rock drum beat, steel pedal guitar and the soaring vocals of lead singer Raul Malo. For my money there are a few singers in modern American music that have been pure, smooth and powerful such as Elvis Presley, Roy Orbison, Jackie Wilson, Trisha Yearwood, and you can add Raul Malo’s name to that impressive list. If you have any doubt, just listen to the below clips of him singing a fine cover version of Etta James’ At Last, Johnny Cash’s I Still Miss Someone, or one of my favorite Springsteen covers, All That Heaven Will Allow. (Malo can also be seen singing I Told You So with Scotty Moore on guitar and DJ Fontana on drums by clicking this link.)

The Mavericks released their first album in 1991 during the height of the ‘Garth Brooks’ country sound and blazed their way through six albums with a fine amalgamation of sounds ranging from country, old school rock and roll, mariachi horns and accordion, up tempo rock, Latin based rhythms  and everything in between. The band broke up in 2003 but is back in style with their new release In Time. If you have ever wondered what Buck Owens and The Buckaroos would sound like backed by the surf rock group The Ventures playing guitar behind a ska beat, here it is in all it’s glory.

The lineup includes Malo, Paul Deakin on drums, Robert Reynolds on bass, Eddie Perez on guitar and Jerry Dale McFadden on accordion, organ, piano and arrangements, with various others helping out on strings, horns and additional percussion. All thirteen songs are original works written by Malo with some help from writing partners. The thirteen songs are drenched in Latin beats, showing their Miami roots as always, like samba and bossa nova, and include two versions of Come Unto Me, in Beatlesesque fashion, one sung in English and one in Spanish over the same backing tracks. The band rips through the entire album like they hadn’t been apart all these years, and they don’t miss a beat or leave a stone unturned.

Appropriately, the album begins with the ska beat opener of Back In Your Arms Again with the lyrics: Once I said I’d never want your love again/You showed up tonight and proved me wrong/ Things I said I’d never do since you and I were through/But here I am back in your arms again. It’s true they have been gone for a while, but now they’re back in their listeners and fans wide open arms. Next up is Lies with a powerful ,rolling, tempo and full on Duane Eddy guitar sound supplied by Perez, and at the end, Malo asking the band to keep rolling as he repeats the last line ‘I believe in all your lies’ three times like he is just happy to be back in the studio with the band and doesn’t want the good times to end.

Come Unto Me is a funky mashup of styles of Ventures guitar sounds, calypso beat, and fluttering accordion threading through the love struck lyrics. Throughout the album, this listener hears influences abound that have fueled their bands highly distinct style throughout their career. Orbison’s Blue Bayou beat can be heard behind In Another’s Arms, a quick tempo runs through Fall Apart with Marty Robbins horns, All Over Again is a testament to the power and glory of Buck Owen’s Bakersfield sound, Forgive Me is drenched in Patsy Cline vocal stylings, and Stevie Ray Vaughn’s guitar work can be heard in the start to Dance In The Moonlight before the song takes off into an infectious samba beat. Through the entire album, Malo’s voice is as pure, powerful and sultry as ever. The man could sing the alphabet, Russian folk songs or David Foster Wallace’s 1,000 page Infinite Jest from start to finish and I would hang on every word and syllable.

But the highlights for me are That’s Not My Name and As Long As There’s Loving Tonight. In the former, Malo seems to be having playful fun with the Ting Tings song from 2008 when he sings: Lonely, Mr. Lonely/That’s what they’ll call me/That’s not my name. In Loving Tonight, it opens with a piano lead straight from Elvis Presley’s All Shook Up and rolls into a boogie woogie, up tempo number that could have been recorded at RCA’s Nashville studios in the 1950s replete with Chet Atkins playing a ‘galloping guitar’, Boots Randolph on the yakkety sax and the Jordanaires supplying the backing oohs and ahhs as Malo complains of his lover: ‘She’s always getting her way/With little or nothing to say/When I know she’s wrong, that’s alright/ As long as there’s loving tonight’. As Dewey Phillips used to say on Memphis radio, “That’ll get it man, that’ll flat get it.”

But, this is not simply a matter of a cover band paying homage to their influences worn on their sleeves. Like true artists, the band and singer are able to pay tribute to those who came before while finding their own voices and own styles, and The Mavericks create their own sound in buckets and spades.  Go out and get this album, and tell em’ Phillips sent ya’.

And if someday, you just have one of those days and need to get away for a few minutes, take a listen to the superlative Dream River from The Mavericks album, Trampoline. Close your eyes, listen and float away down the Dream River. ‘Don’t wake because I don’t mind.’