“I can’t. I can’t go on. It goes so fast. We don’t have time to look at one another. I didn’t realize. So all that was going on and we never noticed. Take me back- up the hill- to my grave. But first: wait! One more look. Good-by, Good-by, world. Good-by, Grover’s Corners…Mama and Papa. Good-by to clocks ticking…and Mama’s sunflowers. And food and coffee. And new-ironed dresses and hot baths…and sleeping and waking up. Oh, earth, you’re too wonderful for anybody to realize you.” character of Emily Webb speaking in Thornton Wilder‘s Our Town.

I have never been much of a social person due to my inherent shyness, personality and own faults. But throughout my life, I have been fortunate to be blessed with extended friends of my family. Friends of my brothers and father and mother have been my friends by default, more so than on my own merits. But I have been lucky to have gotten to know a lot of people over time through my parents including their own social circles, fellow teachers and ex students of my father and some of their high school friends. It is a testament to their generation that I have known so many decent, kind and generous people who went out of their way to treat me as an equal and to take the time and effort to get to know me. So my thoughts and concerns turn to the family of my father’s classmate Kenny Jones, Mattoon High School class of 1960, who passed away last week, preceded by his beautiful and kind wife, Leagene King Jones the prior year. Many of those classmates from 53 years ago maintain special friendships that have carried over the many years. I was reminded of Stephen Kings words at the end of Stand By Me, after the narrator’s childhood friend had been killed, when he wrote, “Some people come in and out of our lives like busboys in a restaurant. And even though I hadn’t seen Chris in ten years, I will miss him forever. I never had any friends later on like the ones I had when I was twelve. Jesus, does anyone?”

Out of the class of 1960, I have been fortunate to spend time and get to know  a cast of characters and world-class personalities such as John David and Sarah Reed, Gene and Joan Clark, Hank and Luellen Weaver and Kenny and Leagene Jones, all fine people, each and every one. Kenny was a mountain of a man who had excelled at sports from a young age including basketball and football, and golf later in life. When someone I know passes away, I try to find a key moment in memory that I can use as a starting point to bring back other memories, and the one I have for Kenny is a snap shot of who he was a person in every way. I once read that someone’s character can be defined as their actions when no one else is watching. It’s easy to do the right things when other people are looking because that is what you are supposed to do in life based on social norms. But what people do in the quiet, personal moments are the true definition because it speaks to who they truly are. 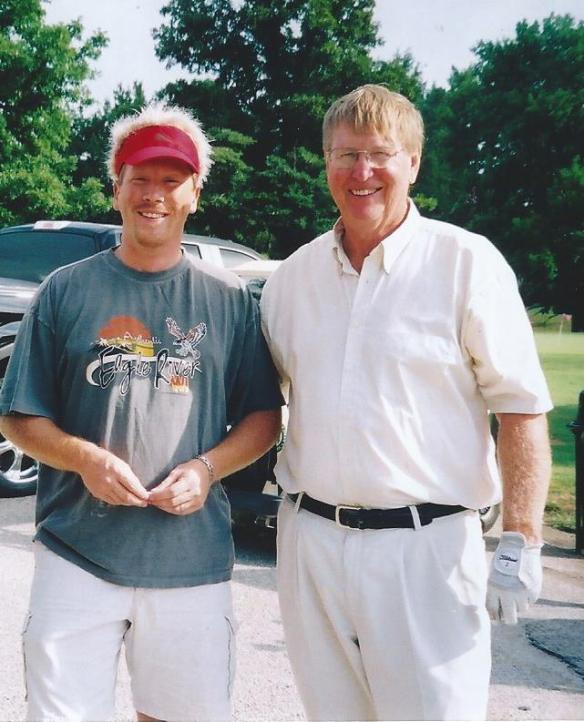 I was lucky enough to play a round of golf with Kenny, my father and another friend years ago at a golf outing at Rolling Hills golf course in Godfrey, Illinois. Kenny was a tremendous golfer who, with his tall, heavy, muscular frame, could hit a ball a country mile and do it with a smile on his face at the knowledge he had hit a perfect ball. Perfection is not something most of us come into contact on a regular basis, but Kenny was a perfect golfer that day and we enjoyed ourselves immensely with a lot of laughs throughout the day. And he was humble enough to give me kind words when I hit my prototypical bad shot on every hole and tell me to keep playing and not worry about it, saying things like, “You are ten times better than your dad. Look at him, he’s terrible.” All this was his way of deftly taking the pressure off of me and allowing me to just enjoy the day.

On the 8th hole, with just us three teammates watching, I witnessed a real athlete at work. I saw Kenny hit a perfect shot, the best one I have seen in person. We were about 30 yards off the green to the right. Playing in a best ball format, the three others of us hit our shots, badly I must say but par for us, as Kenny watched on to see how the ball bounced and rolled, with his hand resting on a club head in his bag. Being the best of the group, he was always the last to hit. And after watching us, Kenny calmly stepped up to his ball with a pitching wedge, took one small practice swing, lined up his feet and swung in a perfect arc. The ball landed softly on the green ten feet from the hole on a perfect line and rolled slowly to its destination and stopped at the bottom of the cup…clink clink. As the rest of us cheered in amazement, Kenny quietly smiled, shook his head, and said, “Well I guess that’s my one good shot for today.” Having heard stories all my life of Kenny’s various athletic achievements from his youth, I knew that he was just being humble and self-effacing as he had done this countless times in his life and that I had been lucky enough to see it and hold it in my memory.

As we go through life, people leave us and they, being singular, incredible people each and every one of them, cannot be replaced as much as we might try. So we remember their voices, their hands, their laugh, their stories and jokes and all of the memories and shared experiences over the years with fondness. We miss them but we take strength from their memory and rejoice. When the American folk singer and artist Woody Guthrie passed away after years of battling a terrible disease, his family had him cremated and spread his ashes in the ocean surrounding Coney Island which was one of Woody’s favorite places to  swim and relax with his family and friends. The family all gathered on that day, spread his ashes to great wide sea, and then went to Nathan’s Hotdogs for lunch which was one of Woody’s favorite places to dine. When asked why, his wife simply stated that is what Woody would have done if he was there himself. I will carry a lot of memories of Kenny and Leagene with me throughout my life. And I will remember them as kind, decent people who did their best for their family and their friends and left the world a better place for having lived. I will remember Kenny as someone who enjoyed a simple game of golf and every time I play myself, I’ll think of him hitting that perfect chip shot. The perfect shot made in the calm and quiet of a beautiful day with only a few on hand to witness the moment. A microcosm of his life. Thank you Kenny Jones and Leagene Jones, god bless you.

Do not stand at my grave and weep, I am not there I do not sleep

I am a thousand winds that blow, I am the diamond’s glitter on snow

I am the sunlight on ripened grain, I am the gentle autumn’s rain

When you awake in the morning’s hush,

I am the soft uplifting rush, Of quiet birds in circled flight

I am the soft stars that shine at night

Do not stand at my grave and cry, I am not there I did not die