In James McMurtry‘s song Charlemagne’s Home Town, he writes of one character, “I measure out my life in coffee grounds.” Coffee lovers around the world can attest to the truth of that declaration. But for me, over the last roughly ten years, I have measured out my life in cups of Caribou coffee. More specifically, the Caribou Coffee in Dekalb, Illinois. Whatever  I needed to get through the day: one in the morning, one in the afternoon and maybe one at night. Ok, maybe that is a stretch, but I frequented the location several times a week, mainly for the coffee but also because of the friendliness of the staff. But, that all came to an end on Sunday February 23, 2013 when the location closed their doors to business for the final time. Egads, my nervous system and kidneys, riding a caffeine induced adrenaline rush, may see this as a good thing, but my heart, mind and memory do not. 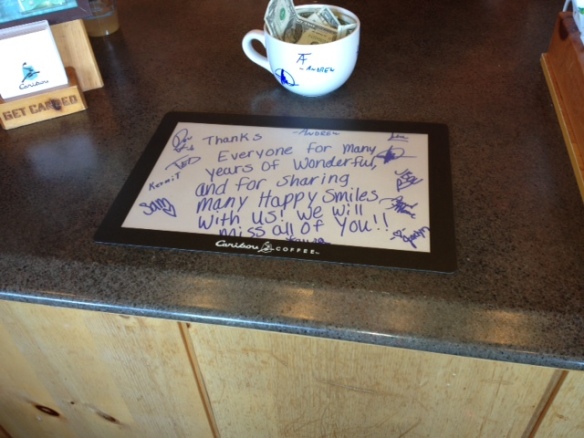 Thanks everyone for many years of wonderful. Counter sign at Caribou

Caribou Coffee was my first introduction to decent, tasteful coffee. I grew up in the southwestern part of Illinois, in what many call the metro east area of St.Louis. I grew up watching my dad and grandparents drink coffee on a daily basis, but I never touched it until I was eighteen and working as an intern for the Illinois Department of Education in Springfield. After suffering through countless, mind numbing meetings in which I fought to keep my eyelids open, I had my first cup, straight from the steaming pot in the corner of a drab, soul crushing state government office. From there I progressed to much more sophisticated sources to fuel my desire, high falutin’ places like Moto Mart, QuickTrip and McDonalds. To the uninitiated sap I was, it tasted like coffee straight from the Kona Coast of Hawaii. Little did I know.

Fast forward a few years when I had moved to the Chicago area, and lo and behold, I came across actual coffee houses which appeared on almost every street corner in some places and had more to offer than a smoking, stale glass pot of warmed over motor oil derivative. These places actually had full menus of every kind of coffee based drinks you could ever imagine. Cappucino, lattes and teas abounded with flavored shots, soy milk, and decaf instead of regular. Wow!!!! For a country boy from the land of corn fields, I felt I had stumbled into coffee paradise.

I first came to the Dekalb Caribou location in 2003 after my in-laws had moved to the area from Geneva. After driving around town a little to see what the area had to offer, my coffee nose steered me to the inviting location at 2385 Sycamore Road. The warm interior decor of cabin-like wood floors and walls and the glowing fireplace next to the comfy couches called to me like Greek Sirens of old. After moving to the area with my wife and kids in 2006, Caribou became my safe haven from the noisy outside world where I could enjoy a coffee and do some reading without small children jumping on my back and cracking two or three ribs. Caribou also became my home away from home and my second office. Since I work virtually, meaning I do not have to be in a physical office for most of the time, I could work from home but found it distracting and unproductive for me most of the time. Working from my second office seemed to focus my attention more, at least for a few hours until the guilt of hogging seating and wi-fi got to my conscience and I left for a body shop or tow yard. The Dekalb Caribou was a place I took my kids, Graham and Rory, often times to get them out of the house for a while to allow mom some much-needed quiet time and rest. I also often took my son there to sit quietly and do some reading, he reading his first chapter books and assignments from school, me reading my beloved newspapers or magazines. He and I each reading alone, but together at the same time and sharing thoughts and funny paragraphs together. 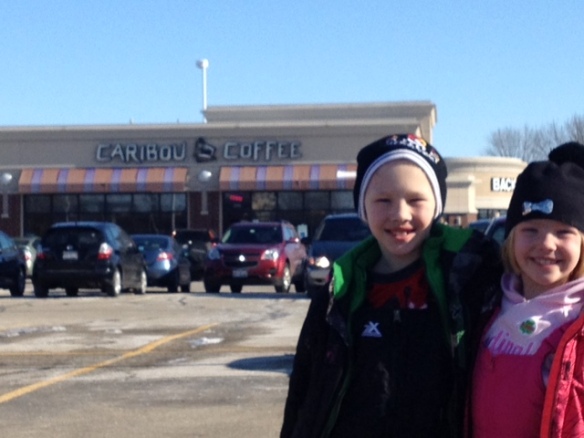 In today’s America, we are inundated with choices of every kind regarding restaurants, bars, houses, neighborhoods, tooth brushes of every color and shape, manual or battery operated, doctors, television and music channels, and on and on ad nauseam. Given the amount of options we have at our disposal, it is quite telling to notice the places we choose to spend our time and where we spend our money. Customers who frequent a specific business location typically do it for a reason: ease of parking or drive-thru, location, service, product, value, etc. Caribou earned my loyalty due to the high quality of their product, menu selections, seating comfort, wi-fi access, but more importantly, they earned my loyalty due to the high level of service and friendliness of the staff. Many of their staff managers and employees have moved onto other locations which belies the quality of their employees. And some of their faces and names have slipped my somewhat aging mind, but the ones I know and saw on a frequent basis are ones I can call friends of mine because they weren’t just doing their jobs of providing coffee and I wasn’t just a nameless schlub who came in the door. They knew my name and they knew my kids names and they asked about my job and my family; they took an interest in me as a person, not just as a customer, and they placed value on knowing their clientele and treating them with respect and appreciation. So thank you to Jackie, Laura, Jared, Jenny, Xavier, Clayton, Andrew, Mathew, Celine, Marissa, and a lot of others. To paraphrase a Bob Dylan song he wrote for his hero Woody Guthrie, “Here’s to the hearts and the hands of the men and women I have known from Caribou, that come with the dust and are gone with the wind.” 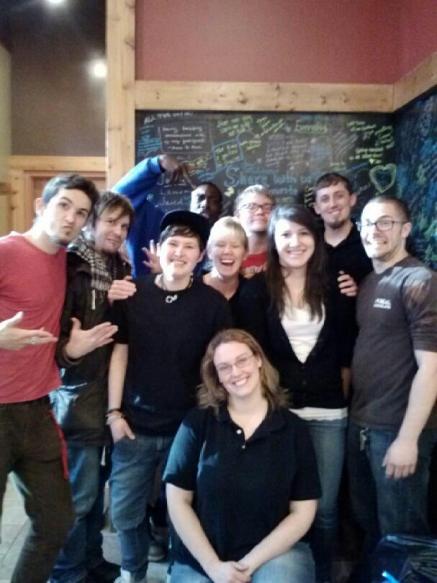 Another Bob Dylan song I have been thinking of a lot this week once I heard the news of the store’s closing is It’s All Over Now, Baby Blue. Recorded in 1965 and released on his classic album, Bringing It All Back Home, it can be interpreted many ways, but one is that it was his kiss off to his prior self and his folk music fans who booed him when he played electric instruments for the first time at the Newport Folk Festival. Up until that time, Dylan had only played acoustic guitar along with his harmonica and played mostly folk music and protest songs, in the vein of Woody Guthrie. Dylan chose the Newport Festival to announce to the world that he was moving on to a new style of music and playing. The fans did not like the news and Dylan did not appreciate the response and chose to play It’s All Over Now, Baby Blue as his last acoustic performance that day, and the lyrics tell the tale of his rebirth:

You must leave now, take what you need, you think will last
But whatever you wish to keep, you better grab it fast

Leave your stepping stones behind, something calls for you
Forget the dead you’ve left, they will not follow you
Strike another match, go start anew
And it’s all over now, Baby Blue

My first stop into Caribou was ten years ago and since then a lot of changes have come and gone in my personal life, in the country and around the world. Family members have passed away, friends and coworkers have moved on to other jobs and other lives, and we  have two kids now who are now eight and six years old. Nothing stays the same forever and people, places and things come and go ‘like the ticking of the clock on the wall.’ But in the end, what remains are the moments of kindness and decency displayed over time, and I was fortunate to experience many as a customer of my favorite coffee-house. As Caribou’s motto says, Life is short, stay awake for it. God bless you staff of the Dekalb Caribou Coffee. 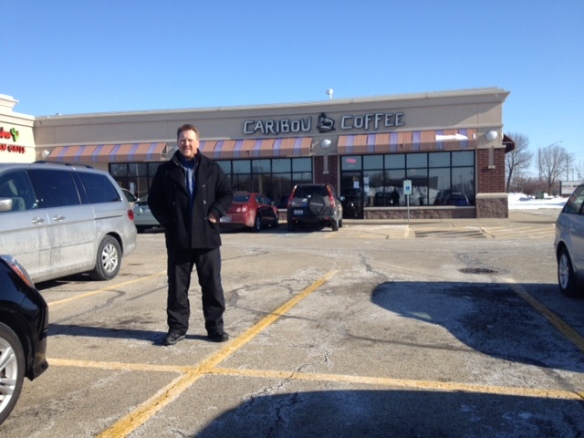