“The last good time always comes, and when you see the darkness creeping towards you, you hold on to what was bright and good. You hold on for dear life.” Stephen King, Joyland

For the last twenty years, I have made a trip to visit family in the beautiful north woods of upper Wisconsin. Unlike the mostly flat, monotonous plains of Illinois with it’s never ending fields of corn and soybeans, Wisconsin offers lots of beautiful scenery including the meandering, winding Wisconsin River that criss-crosses US-51/I-39 up through the center of the state, countless lakes, wildlife and infinite stands of pine trees. Over the years, I have gone in various stages of life: alone, together with friends, with my girlfriend from college who became  my wife, with a young Graham who was 11 months old when he first began crawling across the carpets of my Aunt Glenda and Uncle Forest’s Wisconsin living room, and finally as a family once Aurora Rose joined us.

The yearly trek allows us to unwind from our normal hectic lives as we take walks in the quiet woods, enjoy boat rides and sight-seeing, lake homes and bald eagles, courtesy of the local tour guide extraordinaire, horseback riding and window shopping in Three Lakes and Eagle River. Just like other traditions, it allows us to visit family, rest and reflect on the passage of time and think of those we have loved who are no longer here. During our latest trip this summer, we stumbled upon an experience in life that unfortunately doesn’t come more often. While walking the mean streets 😉 of downtown Eagle River, we did our normal window shopping, stopped into local stores like Grandma’s Toy Box, The Arrowhead, and The Fountain Bleu and had some world-famous Eagle River fudge from Tremblay’s Sweet  Shop. We also went into Lyn’s Antiques, located at 108 Wall Street, to peruse yesterday’s toys and household items. After looking for a short time, Graham spied a case of fishing lures. He has caught a fever, a fishing fever, and the only prescription is more fishing lures.

Now, as a back story, you need to understand that I never really fished as a kid unless my brother Sean and I  tagged along with friends or family. We were awful, inept fishermen as our guests would be forced to bait the hooks and show us how to cast and reel the line back in. God forbid we actually caught something because due to our nature, we were physically and mentally incapable of taking a live fish off a hook. This has always puzzled me since as kids who worked in our family’s restaurant for 20 years, we had to touch some disgusting stuff in preparing food including raw chicken, chicken hearts, livers and gizzards and a plethora of other items. (Yes I said plethora). Given our laughable fishing skills, we might as well have stayed in the truck and let them fish by themselves. It would have been more peaceful and relaxing for them and they wouldn’t have to work so hard bailing our sorry asses out of worms and tackle.

Fast forward 30 years, and my fishing skills have not gotten any better much to the detriment of my son who, slowly over time, has gotten an interest in fishing much to my embarrassment. As a parent, I have been more than capable and competent and succeeded in teaching him the basics and finer points of baseball. I helped him learn to read and develop a passion for reading and learning. And I have taught him some basics of gardening and lawn care. But when it comes to fishing, Stevie Wonder would probably be more help than the floundering schlub I am. I am man enough to admit that the reason for this: I am what I eat……chicken. When it comes to many things in life involving living creatures, touching the family hamster, picking up dead rabbits in the backyard or a dead mouse in the living room, I would rather stick a screwdriver in an electric socket and hang on for dear life. Due to my cowardly ways and inability to be any degree of a rational, sane human, I often times freak out and run when confronted with a spider or live fish on a hook. And because of this, Graham has not gotten the exposure to fishing he should have been given. He caught his first fish courtesy of his grand father Dennis Renner at a campsite near Belvidere, Il. But  he didn’t really learn to fish and catch one on his own until our last trip to Wisconsin. There at the end of the boat dock upon Little Fork Lake, one of the three lakes that makes up the town of the same name, Graham and Rory caught their real first fish using a rod and reel, tackle and minnows purchased at Jokin’ Joe’s Baitshop. Rory of course had to have a pink fishing rod. With the help of their Uncle Forest and their mother, Graham and Rory caught several small Rainbow trout and some blue gills much to their amusement and delight. Their screams of “I did it!!!I did it!!!” reminded me a lot of a crazed Sally Fields accepting her best actress award at the Oscars and exclaiming, “They like me!!!They really like me!!!” 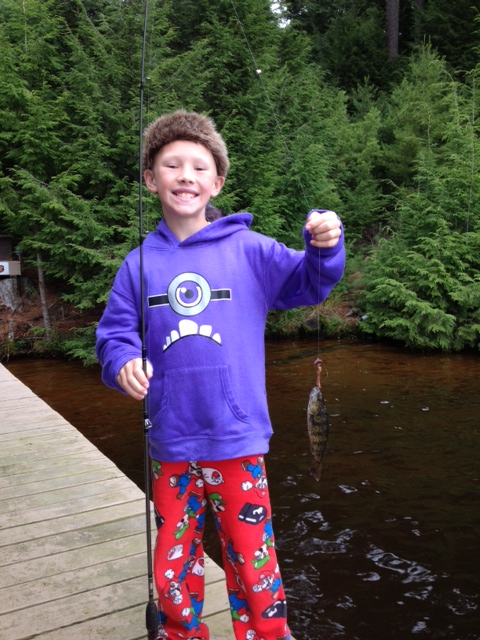 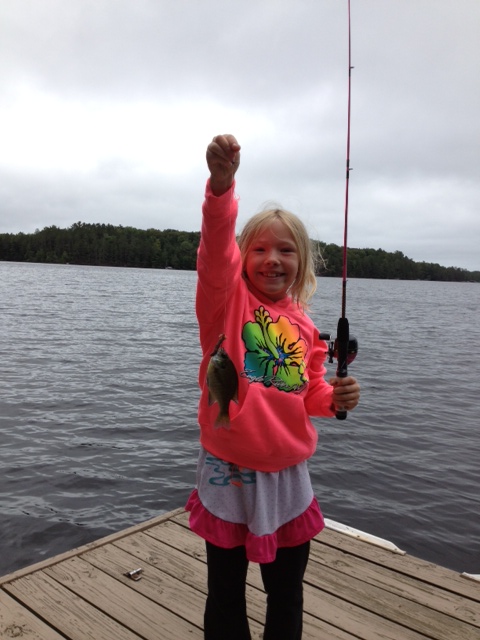 Back to the action at the antique store. Graham’s eyes lit up when he saw the fishing lures at the antique shop as these were far more complex and sophisticated than anything he had in his small blue tackle box. As usual when he has his eye on something in a store, Graham looked them over thoroughly trying to select the one he liked most and weighing the cost of the item, how much money he had in his pocket and calculating how much he would have left and what else he wanted to buy at the other shops. He has amazing self-control at times like these, a skill his father never learned. After selecting a lure that cost $2.50 he headed towards the counter, pulling his money from his pocket as he walked across the ancient wooden floor. The man behind the counter, who must have been a co-owner, smiled as Graham approached and came around the corner to talk to him. The man kneeled down to get at Graham’s eye level and began a slow, friendly conversation in a grandfatherly fashion.

Q: Well Graham, that’s a nice lure you got there. Are you going to use it this weekend?

Q: Is that your money or did someone give it to you?

Q: Have you been a good boy so far this year?

Q: Did you do a good job in school last time?

Q: Well, I tell you what. If you’ll go home and catch a nice, big fish with that lure, will you come back next year and tell me all about it?

Q: Well, then you keep your money and come see me next year and tell me your fishing story.

In that extraordinary brief time and encounter, human kindness, was on full display. The $2.50 was a small amount to pay for the lure, but that one person taught my son a valuable lesson on the difference between cost and value. The lure cost $2.50, but the value of that little exchange cannot be measured. So often in life, throughout so many days of work, play and living, we encounter rude, inconsiderate, selfish people who think only for themselves with not one regard for those around them. It’s about nothing other than their own needs and desires and the rest be damned. But every once in a while, you stumble upon special people and special moments in time that you’ll never forget. The way to make the world a better place is to take those moments of kindness and move it forward by being kind and considerate and giving to others.

Long from now, many fishing trips gone by, maybe Graham will have some vague memories of our trips to Wisconsin when he was a kid and all the good times we shared, but a lot of them naturally will be long gone. Such is life. But maybe one distant day, he’ll see a small boy buying his first fishing pole in a store somewhere, maybe he’ll stop and watch him for a minute and maybe he’ll remember a small moment of human kindness long ago in a small store in northern Wisconsin and, in the words of Kris Kristofferson, ‘It will take him back to something that he lost somehow, somewhere along the way.’

Graham will go fishing this year and next and hopefully will catch a big fish or two, and we’ll return once more to the northern woods next summer. And we’ll go back to the antique shop on Wall Street in Eagle River and share some stories of the big ones he caught and others that got away. But, just like a rainbow after the rain, we’ll be back. We made a promise to return, and it’s the least we can do to repay the kindness. ‘Ain’t it just like a human, here comes that rainbow again.’